Whatever way we had planned and booked the trip to return to Ireland we had to travel back from La Paz to Lima in Peru. With a day to spare we decided to stopover in Cusco again since we had enjoyed the city so much the last time. Time to visit Qurikancha, a cathedral that was once an important palace of the Incas and contains some great bits and pieces like these artworks below, one representing the dark spots in the sky where the Inca people saw the animals (can you spot a llama, frog, bug, fox?) and one representing wakas, the sacred lines connecting several Inca sites. 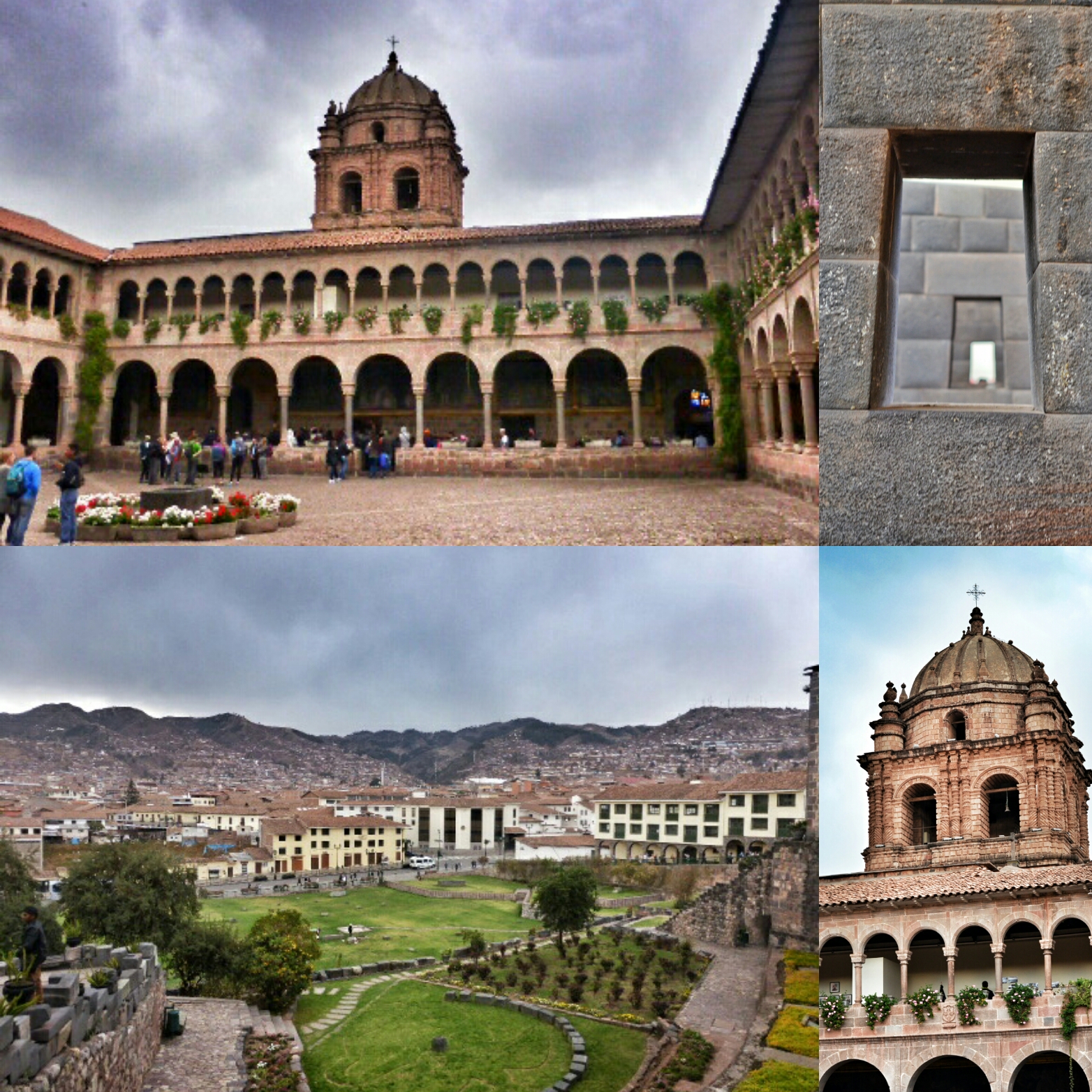 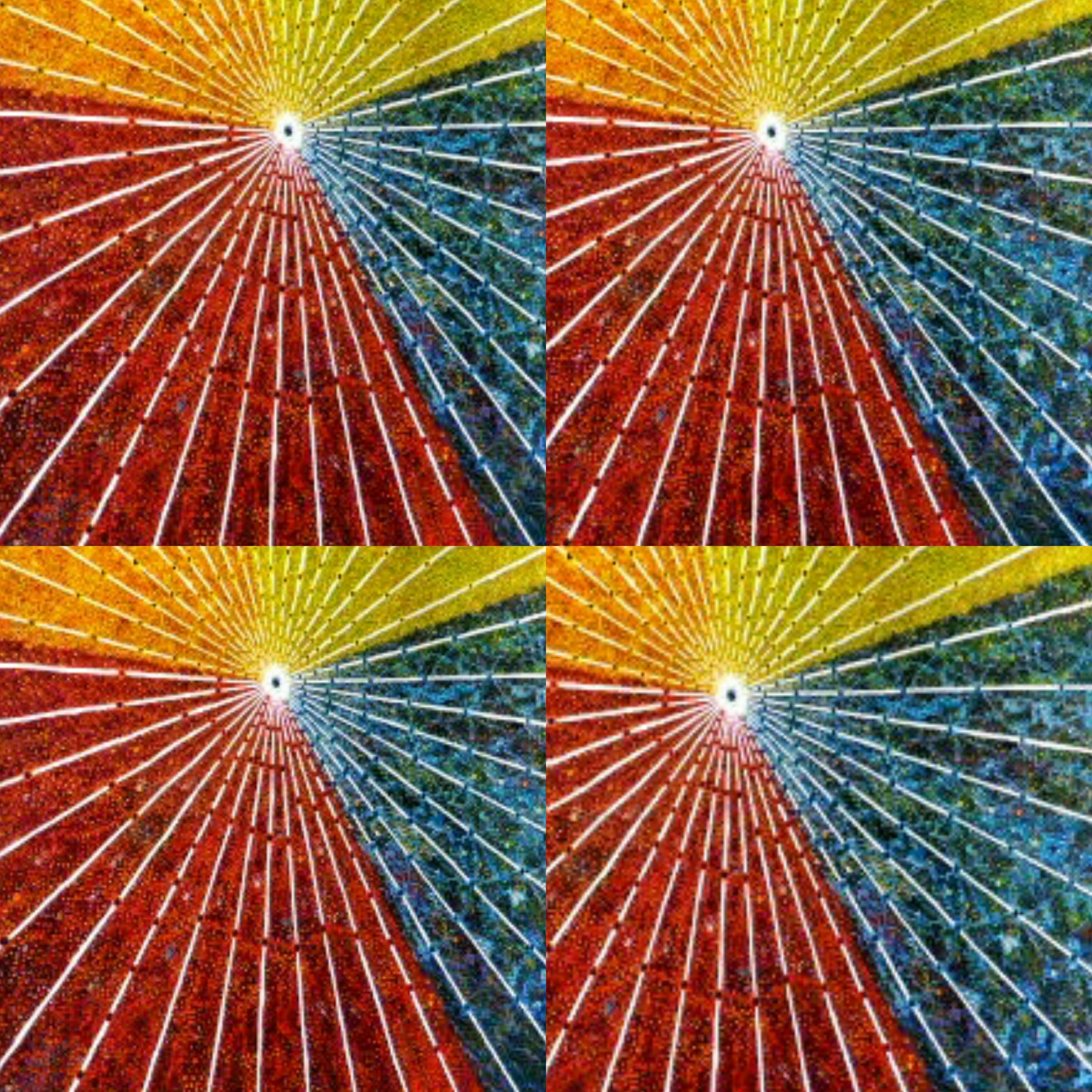 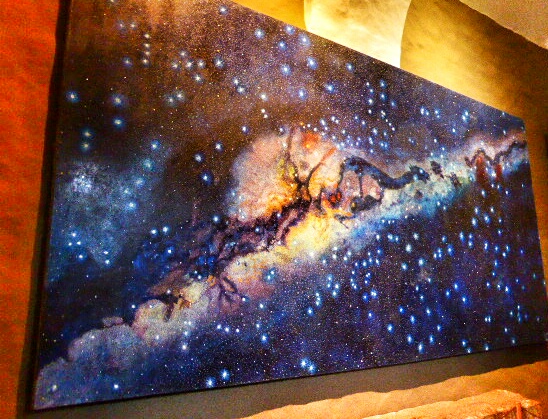 One afternoon free for a bit of shopping and one day to visit the Sacred Valley with a tour group. We had briefly stopped in the valley on the way to the Inca Trek, but I am so glad we took another day to explore the rest of it. We left nice and early in the morning, stopped off in a market on the way and clambered off the bus at Pisac, an Inca site perched on a hill with small huts overlooking rows upon rows of terraces and a honeycomb cliff face where they buried the bodies of their ancestors. 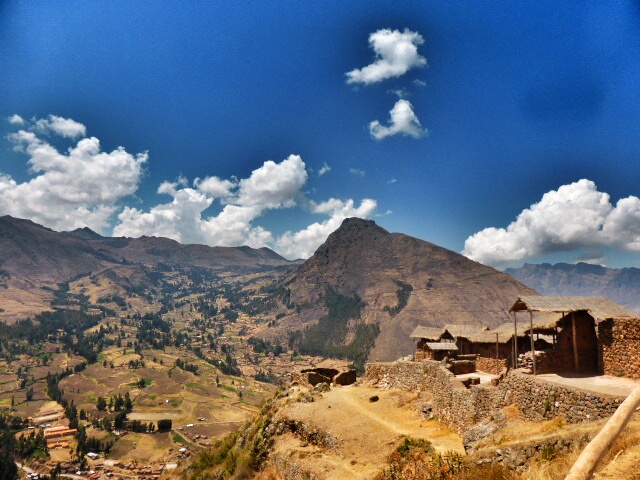 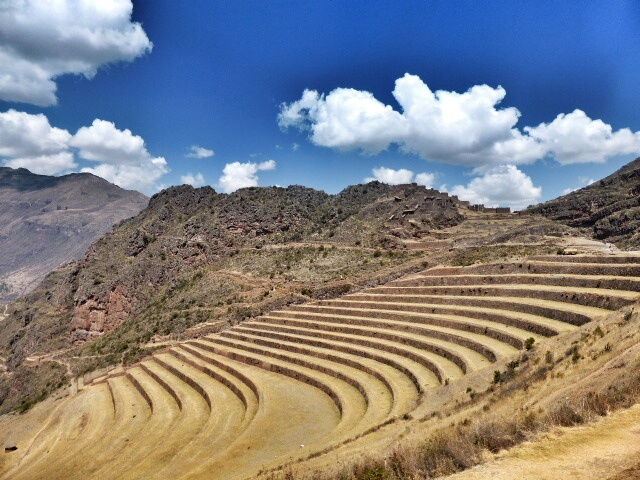 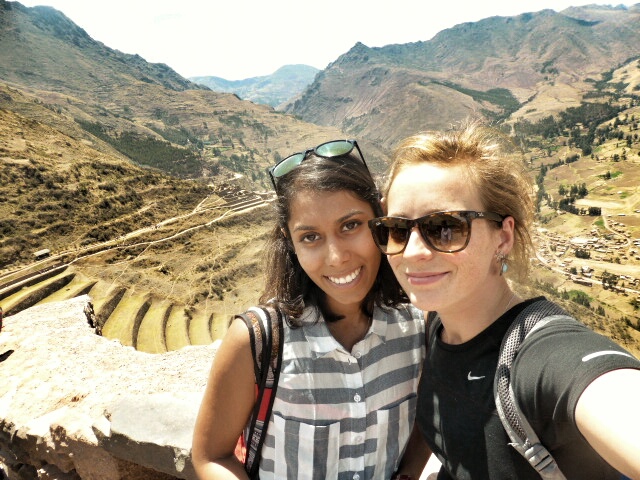 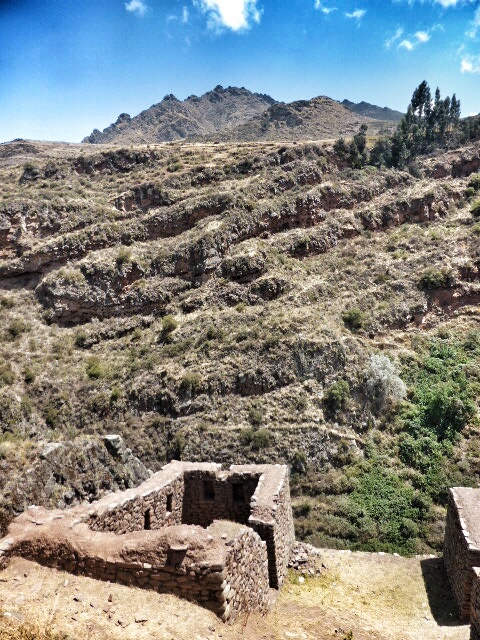 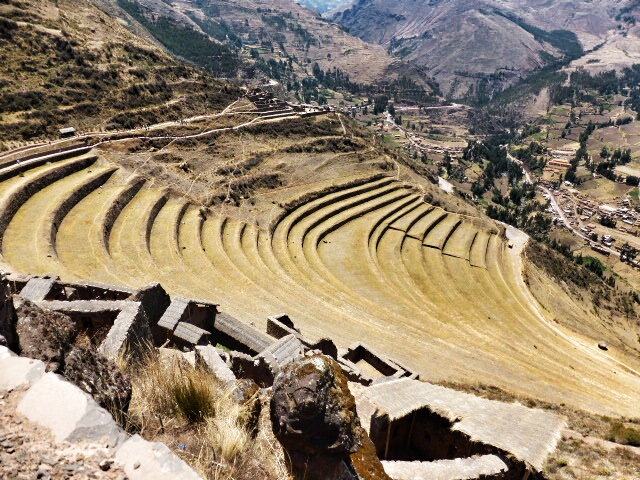 From there we stopped at a place where they showed us briefly how they made a certain style of jewellery (and persuaded you to buy some) and a buffet style lunch restaurant which was the only option to grab some food if you hadn’t brought any. From there we drove to Ollantaytambo, anther small site scattered across two mountainsides overlooking a bustling town (it leads to Aguas Calientes and Machu Picchu so it was really busy). It was some climb to get to the top of the terraces, but worth the view across to the trails crisscrossing the other side of the mountain, leading up to what was believed to be storage houses and a face carved into the rock. 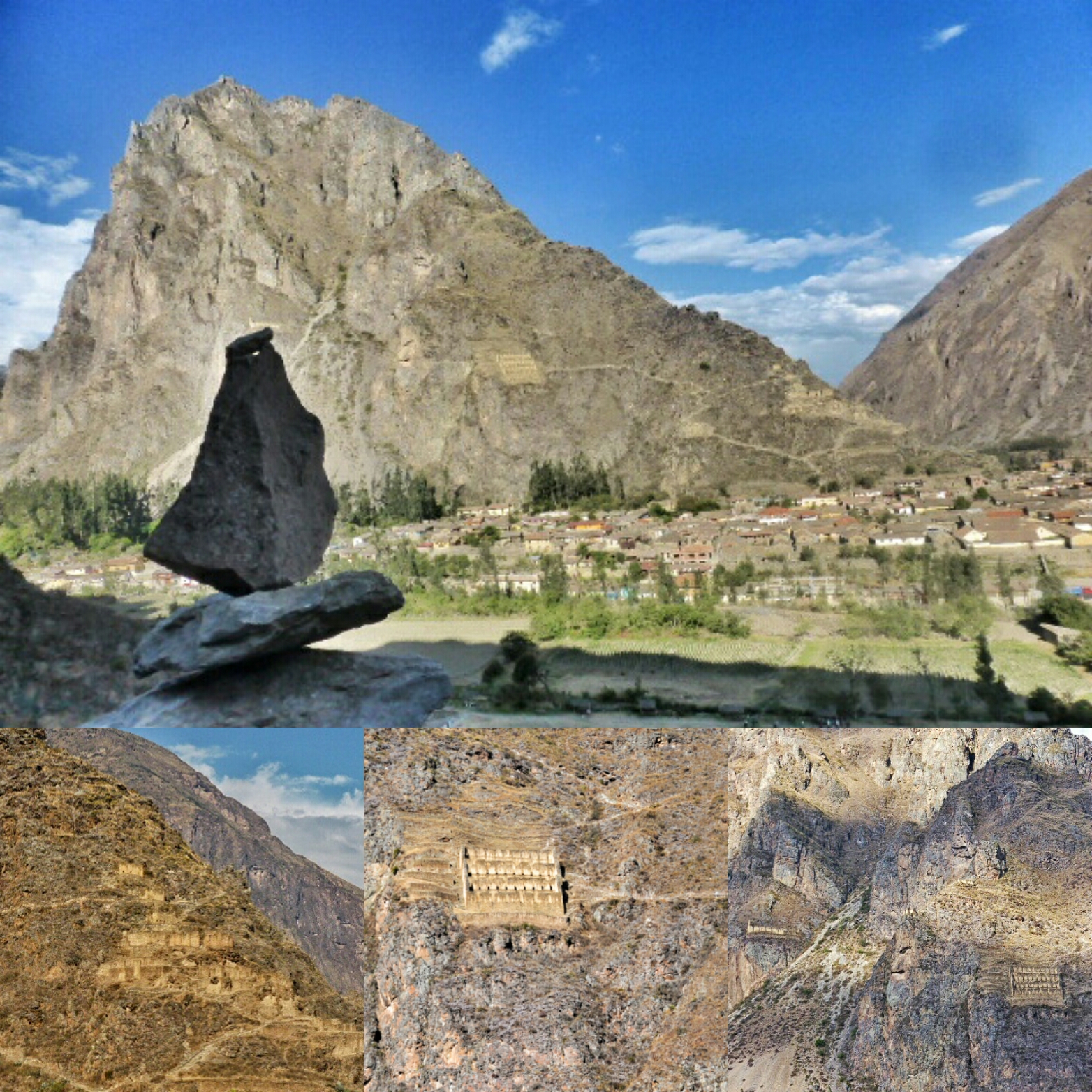 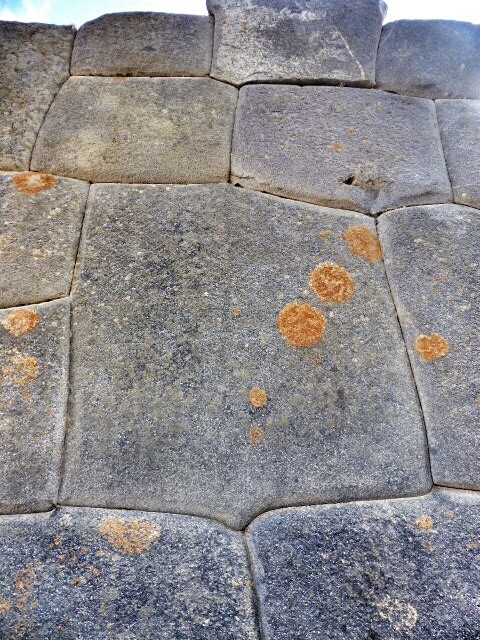 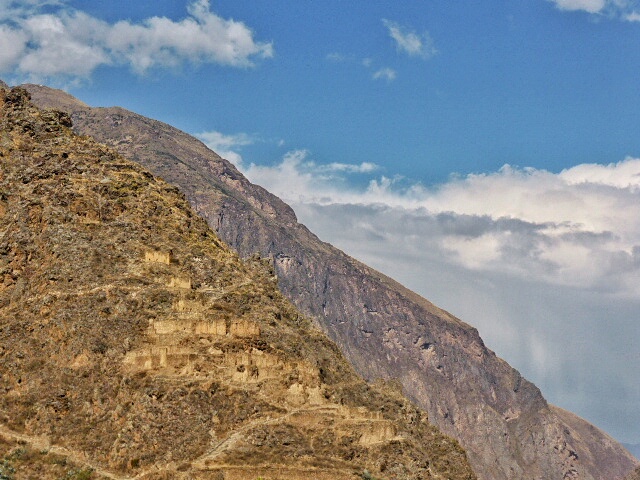 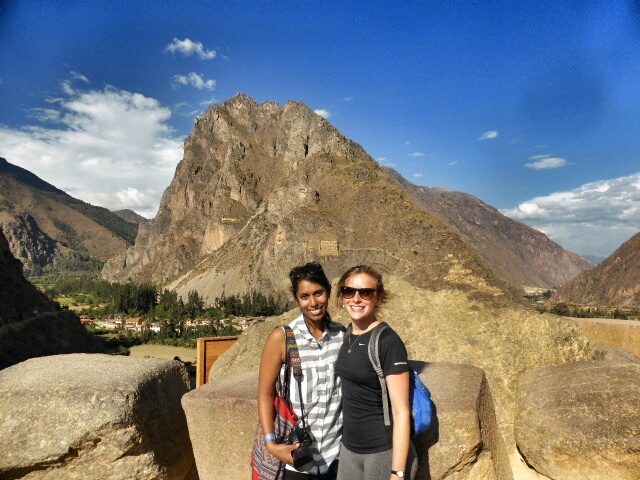 As the sun started setting we wound our way through the countryside up to a great view of the rolling plains and plateaus and the glaciers among the mountain peaks behind us. Chinchero is a small town but contains a beautiful square where women sell traditional goods in traditional outfits in front of a spectacular old church. There was some sort of procession happening just as we arrived – the little kid dancing at the head of it just stole the show! 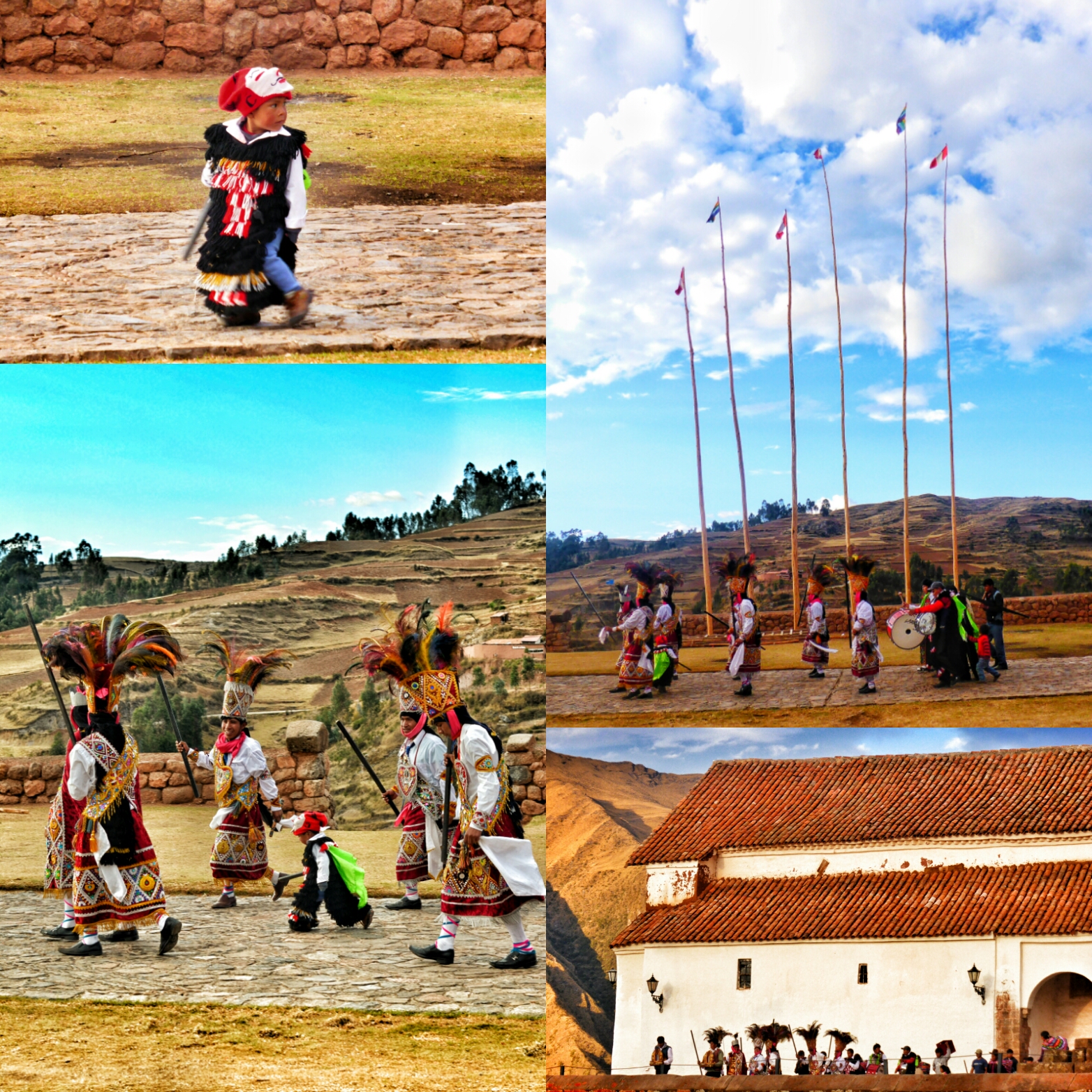 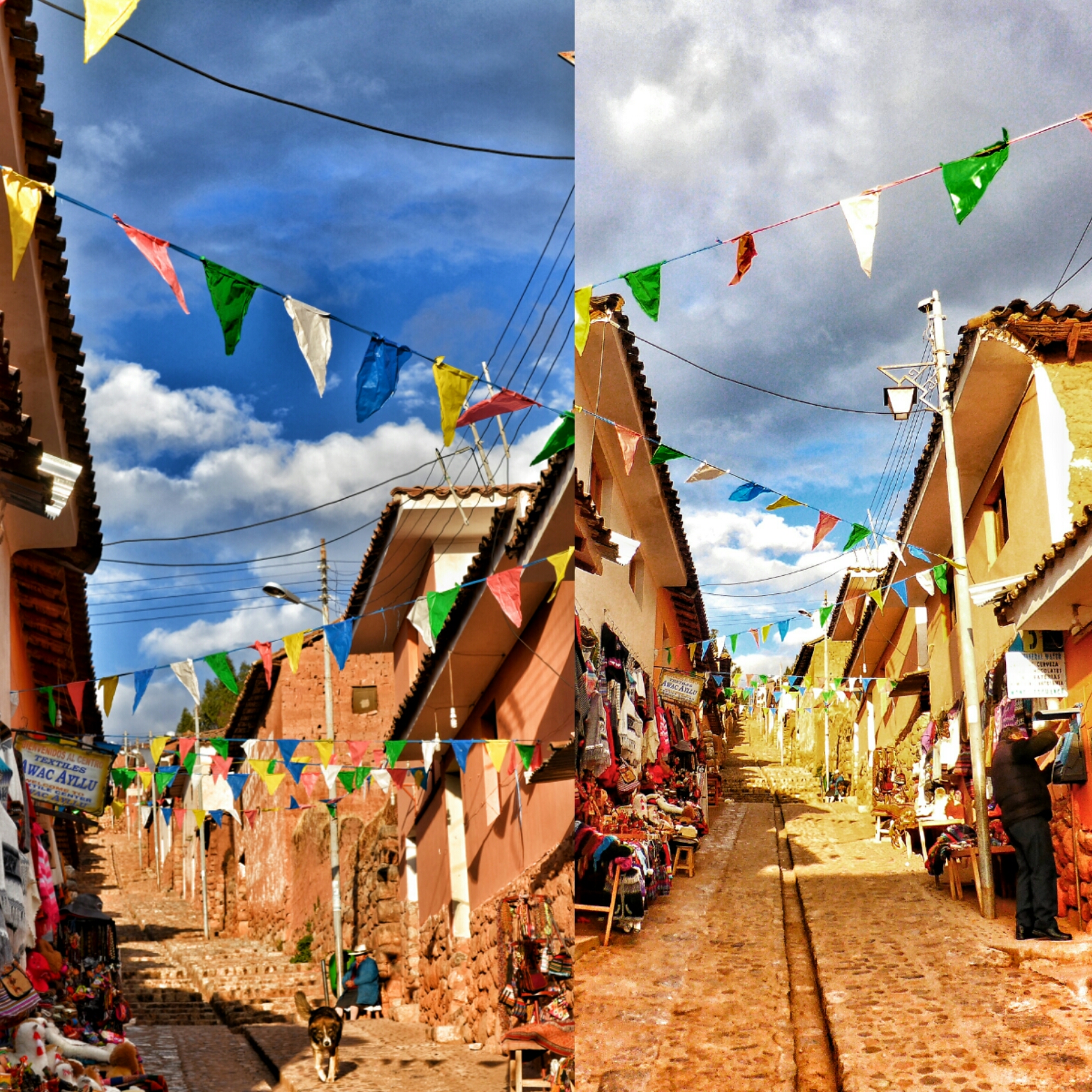 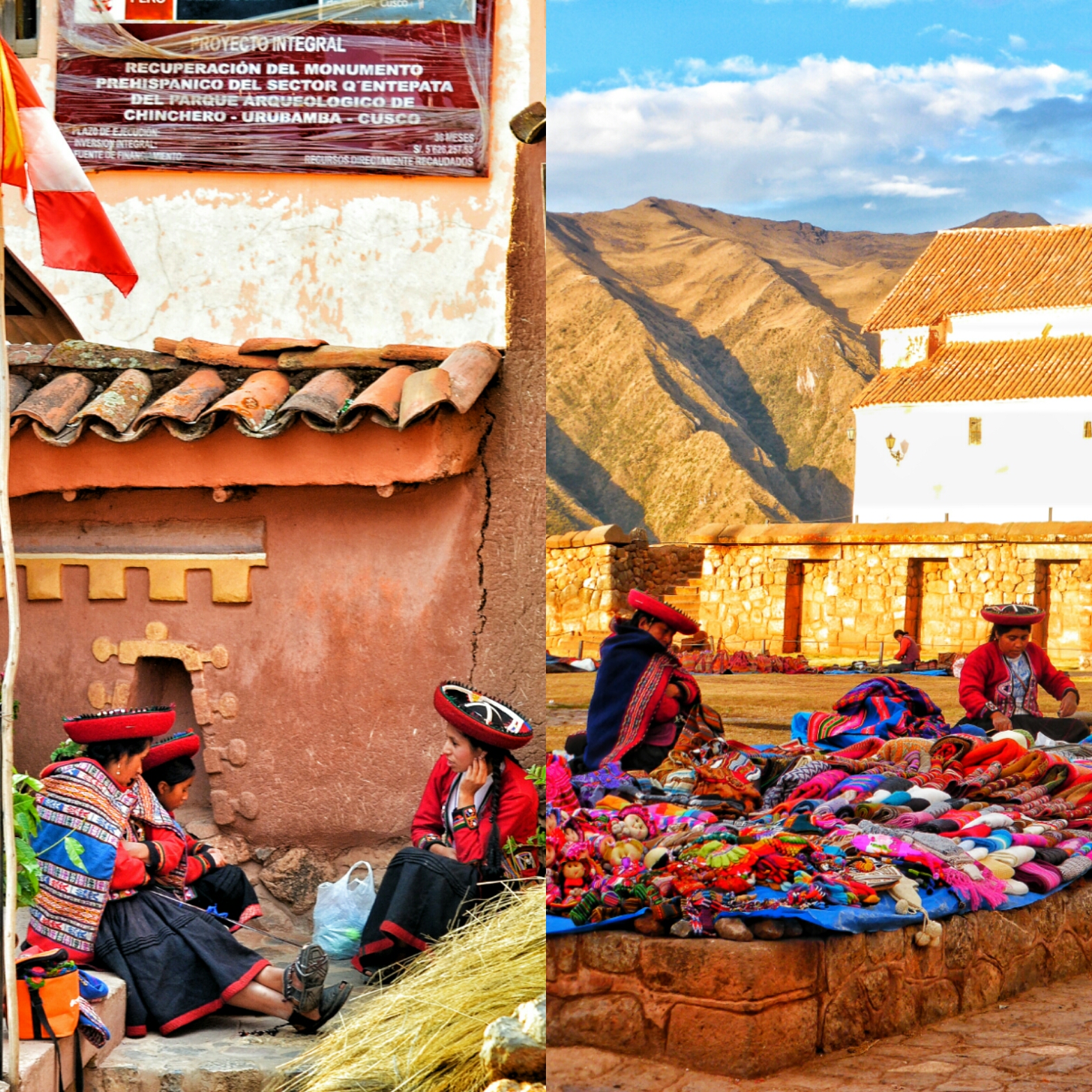 We left the city glowing in the setting sun and went back to Cusco for one last meal in South America. Since it was a special evening we went to the highly rated Uchu. The food was spectacular; crostini with prawns, roasted pepper, lemon and rocket, steak and sausages sizzling on a hot plate with three different sauces and chilli/peanut mashed potatoes and the highlight which I could only manage a tiny spoonful of was a plate of chocolate based goodies. 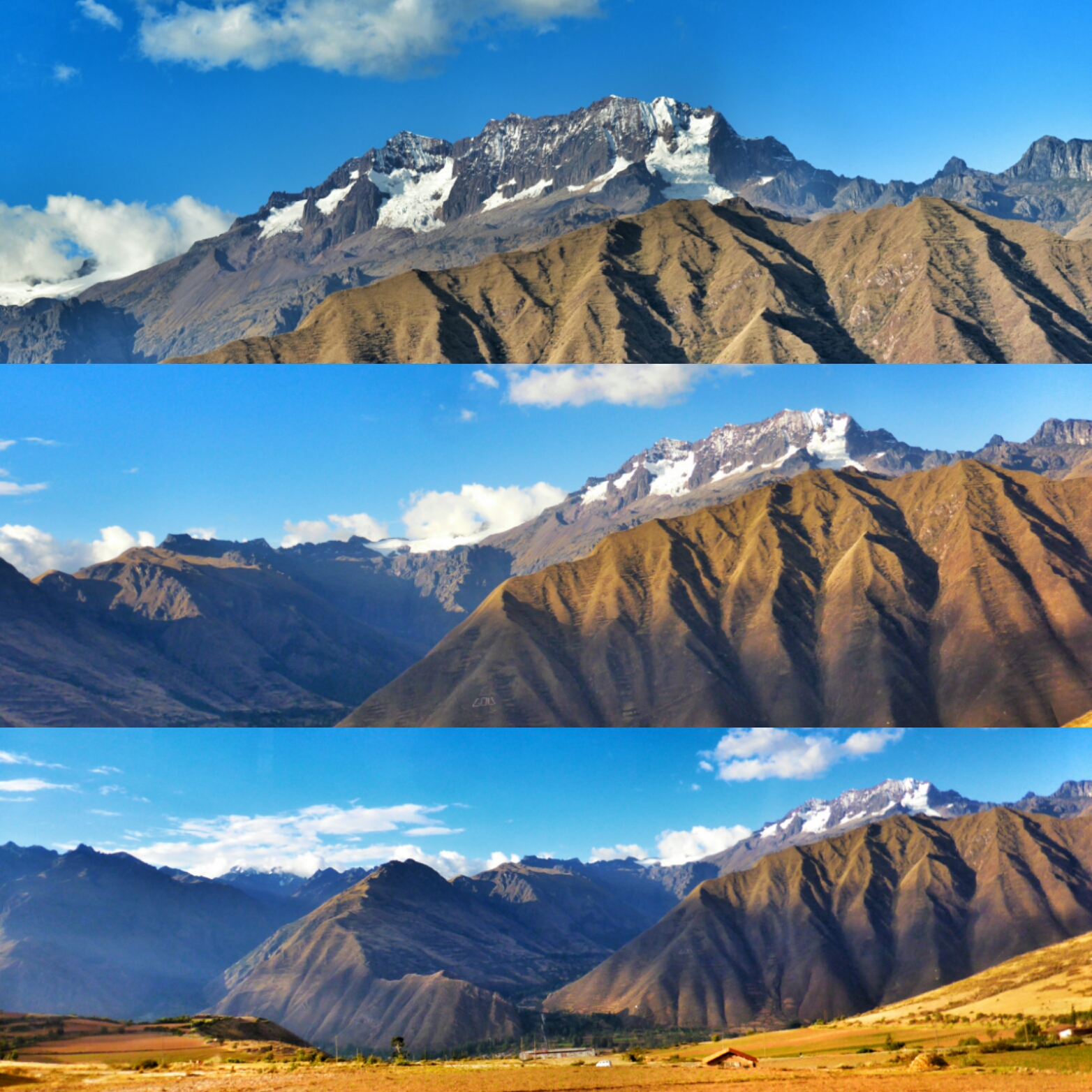 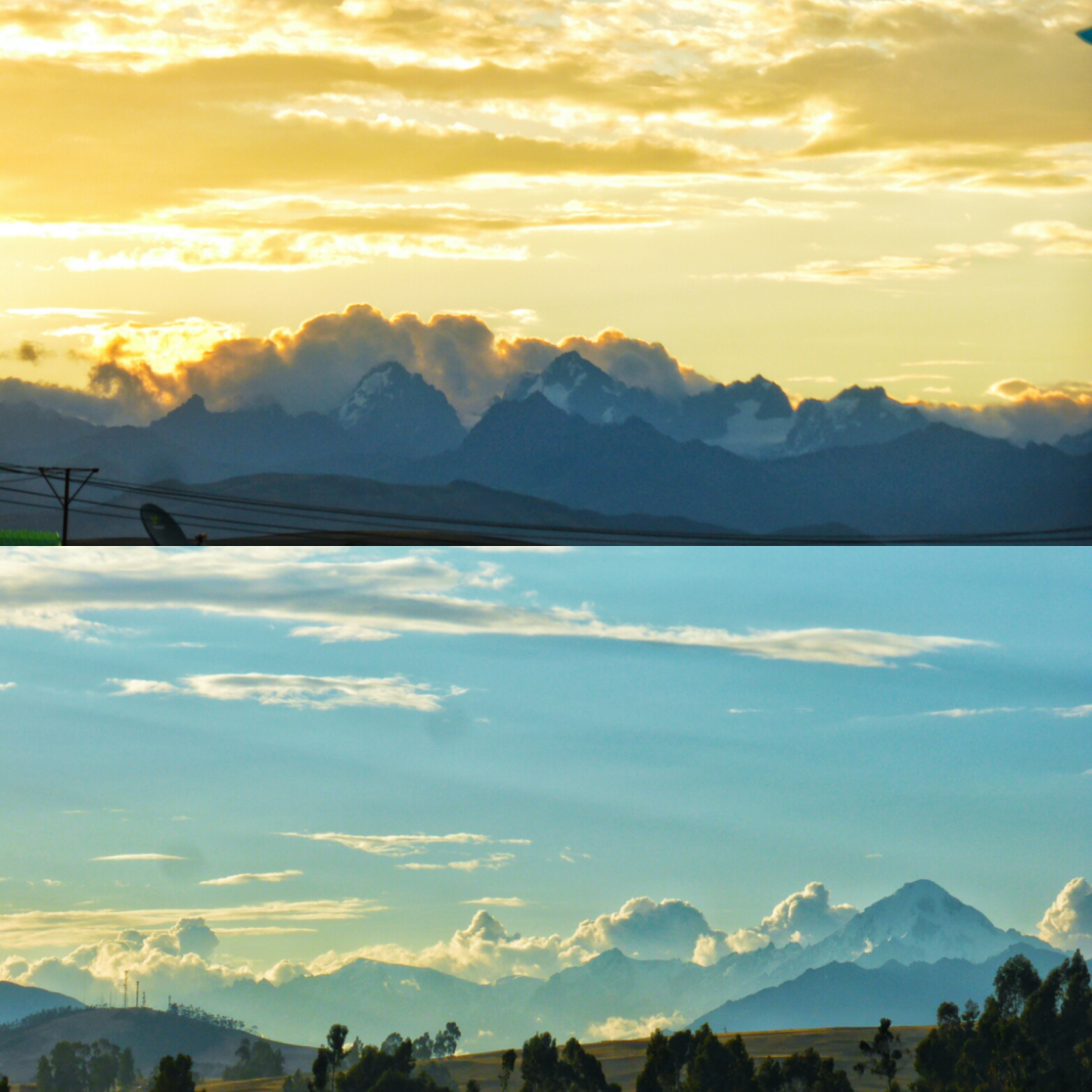 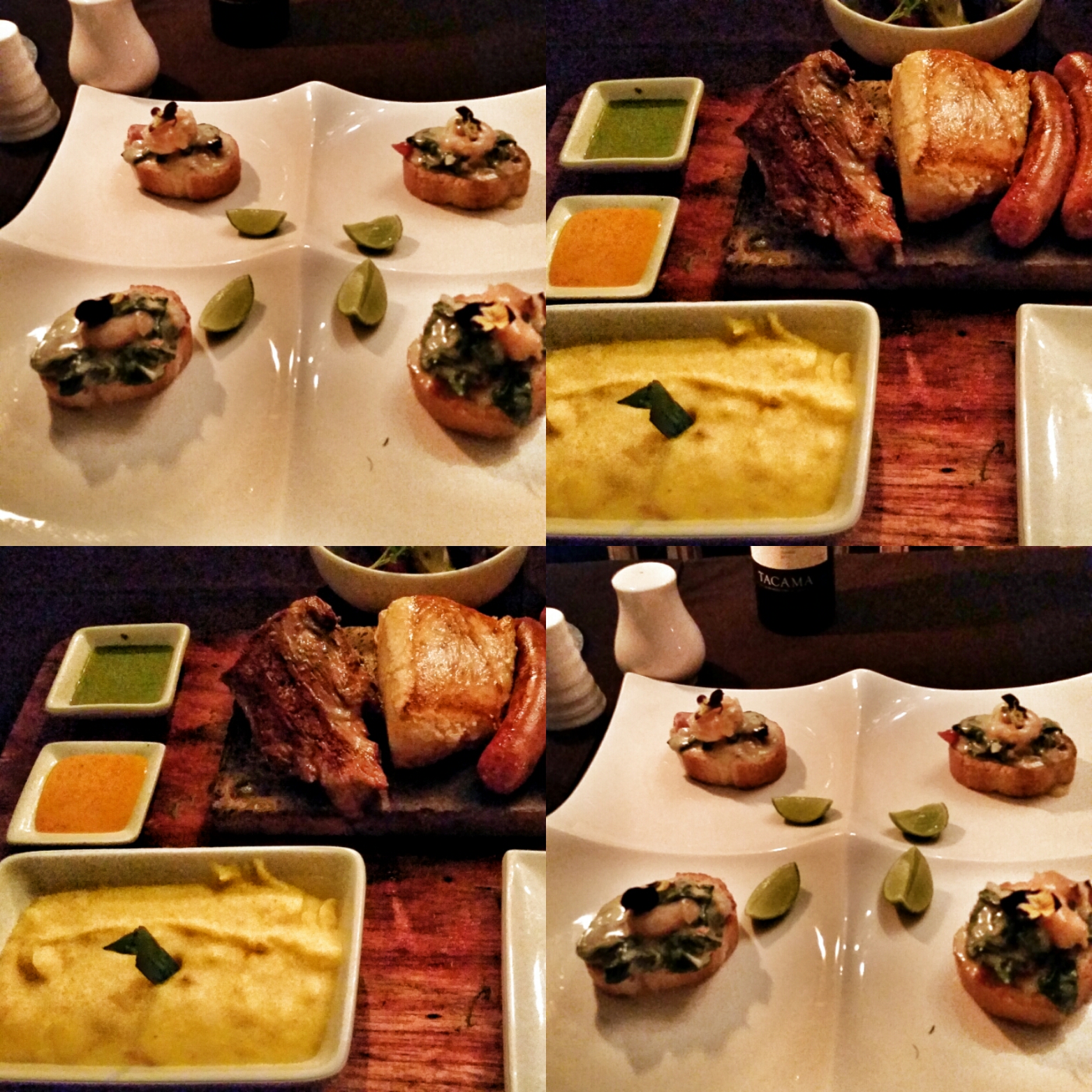 Well rested the next morning we hopped on a flight to Lima, took a taxi into the city ONLY to find a place which sold picarones, didnt find picarones, ate elsewhere, had difficulty hailing a taxi to get back to the airport, paid more than usual to the driver, who had to stop and ask for directions on the way and removed his taxi sign before entering the airport and told us we were just friends he was driving to the airport aaaand our flight was delayed by three hours. But having just had the most amazing holiday ever who’s complaining…… Peru & Bolivia – see you next time!