I barely had 24 hours to re-pack my suitcase in a rainy Dublin before I was reunited with a best friend and went right back to the airport to catch a flight to Lima. The first impressions of Lima that it was big, bustling, busy, noisy and that the traffic was crazy. We made it to our hostel in the Miraflores district in one piece, crashed into bed immediately and having decided that Lima wasn’t really our thing, hopped on a flight to Juliaca the next morning having survived the traffic which was worse than the night before – and I thought Italian drivers were crazy…..

Having spent most of the short flight glued to the window admiring the Andes below, we didn’t stay long in Juliaca but grabbed a bus and arrived in the small lakeside city of Puno less than an hour later. Breathless thanks to the altitude and the several flights of stairs in Pirwa hostel we rested before going out to explore. Lunch was a priority and we stopped off in a vegan restaurant called Loving Hut (we had to go, just for the name of the place) and had a deliciously cheap but plentiful meal entertained by the super friendly owner. 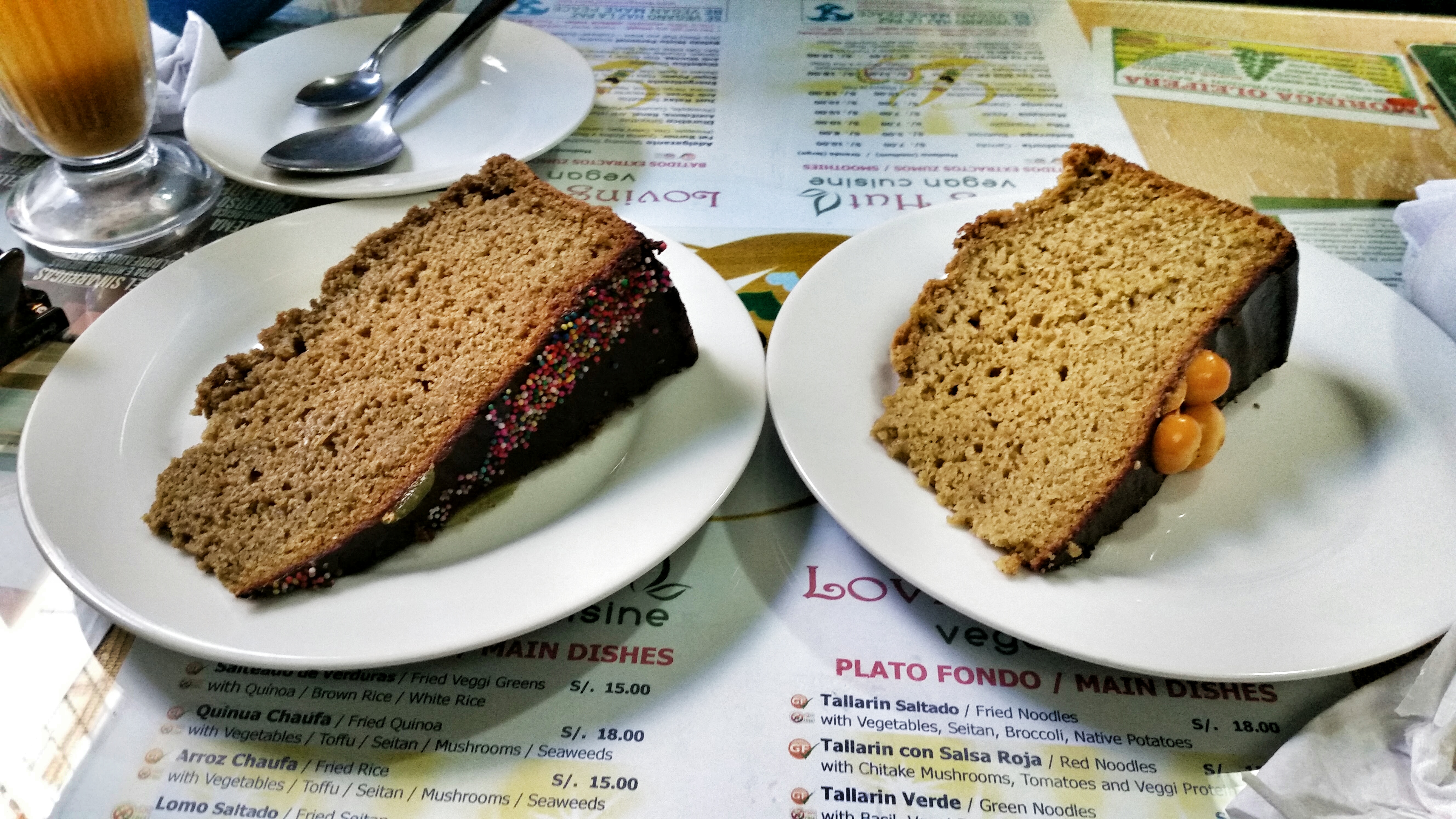 From there it was a short walk down to the lakeside where lots of boats were waiting beyond a little street market. By this stage it was a little late in the afternoon for a boat trip so loaded with our shopping bags (we couldn’t resist all that was on offer) we continued back to the hostel for a rest (that altitude change from Lima up to 3400m really shocked my system). Once recovered it was back out to visit the main square and the streets around it for an attempted meet up with my cousin who was co-incidentally in the same place at the same time (we still didnt manage to meet) and dinner (in the top place in Puno, a relatively new restaurant run by some lovely french guys which I can’t remember the name of, but the food was delicious if a little salty). 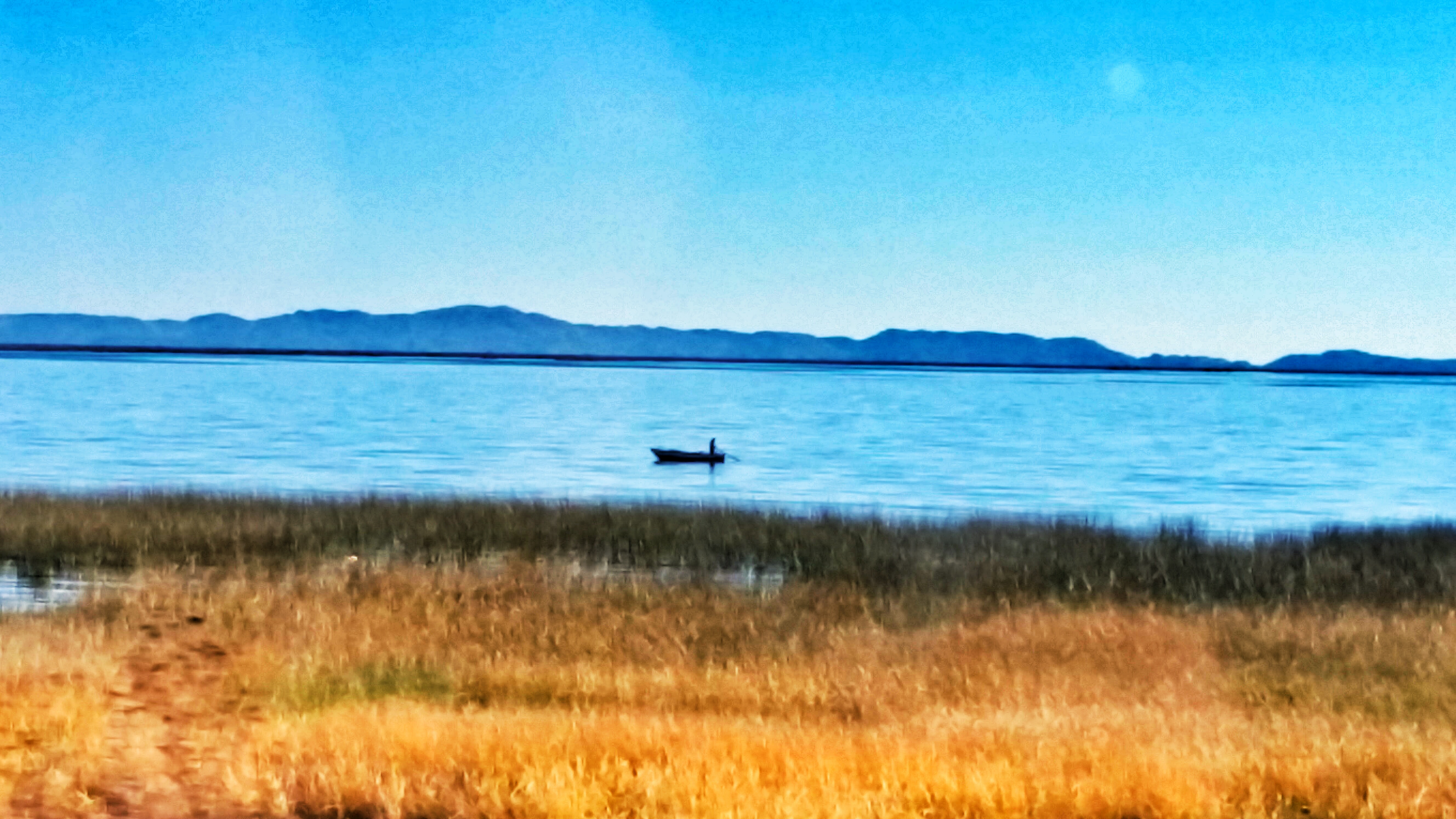 With only three weeks to explore both Peru and Bolivia, we left early next morning to catch a bus driving around Lake Titicaca and cross the border (this involved getting of the bus for Peruvian immigration stamps, walking over to Bolivian immigration across the border for another form and more stamps). From there it was a short drive on to Copacabana, infinitely more touristy than Puno. Luckily we had arrived early enough to drop our stuff at the hostel and walk down to the marina to get a boat across to Isla del Sol (yup, we were sitting on the roof of the boat). The journey takes about an hour, our boat must have been slower since we were being overtaken by every other boat on the water, although the view is spectacular if a little windy and chilly at the end of August. On the island we had around an hour to climb up through the small range of stores and cafes up the left side of the hill to enjoy the view before continuing down the right side of the hill. We passed several donkeys with their herders, women selling homemade goods, an enterprising young kid with an alpaca (2 bolivianos for a photo) and a small botanical garden. The boat back stopped at some small Inca ruins (for ten minutes, thankfully they are small so ten minutes is just enough to run around and snap photos) before slowly puttering its way back to Copacabana. There we enjoyed the sunset from the roof of one of the beachside bars (touristic I told you!), ate trout from the lake in one of the many restaurants and fell into bed.

The challenge I set myself the next morning was to ignore the altitude and climb the hill in Copacabana. It was pretty steep, lots of steps going up, up and up, but the top stretched out into an area for worship/prayer overlooking the lake, scattered with scorch marks and confetti with women setting up makeshift stalls in the free nooks to sell anything and everything. I met the Swiss guys from earlier again – small world, we continued to run into them for the rest of our week in Bolivia – and after a coffee once I had recovered and made it back down the hill again they advised us that the best place to eat trout was along the lake short in one of the little tin huts. We followed their advice so now I can safely pass on their recommendations as a must do when in Copacabana and at a much cheaper price than the other restaurants. 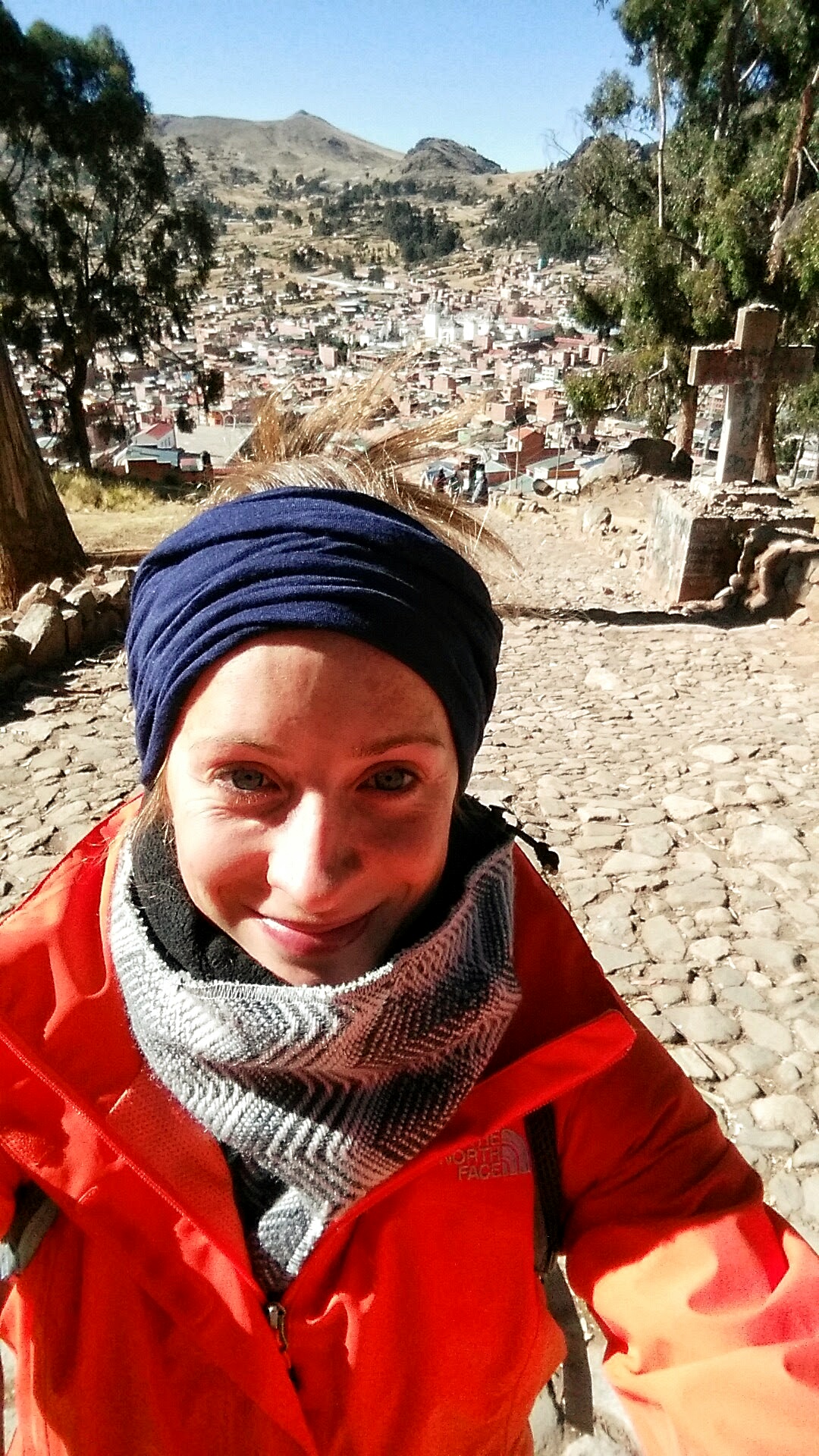 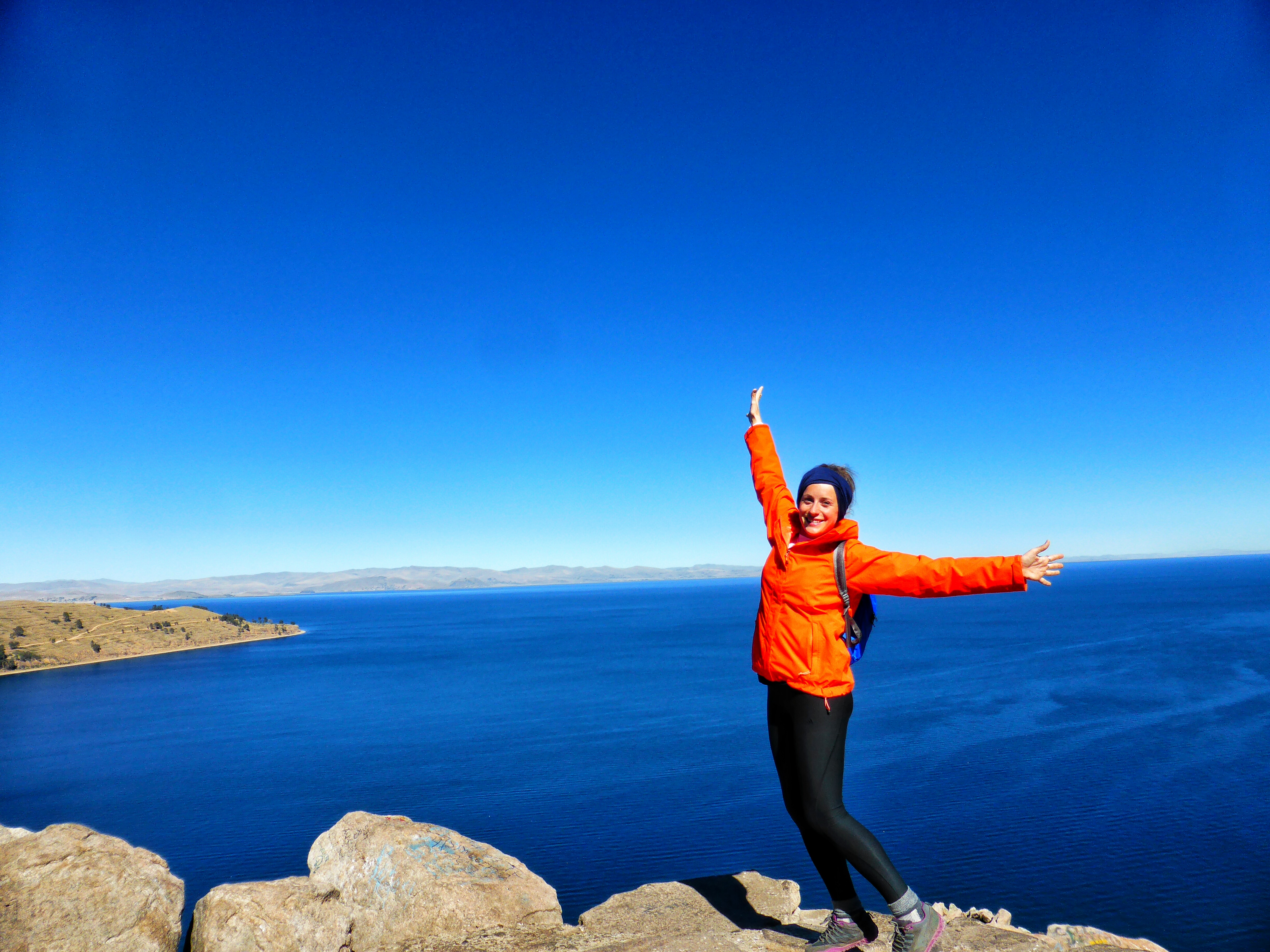 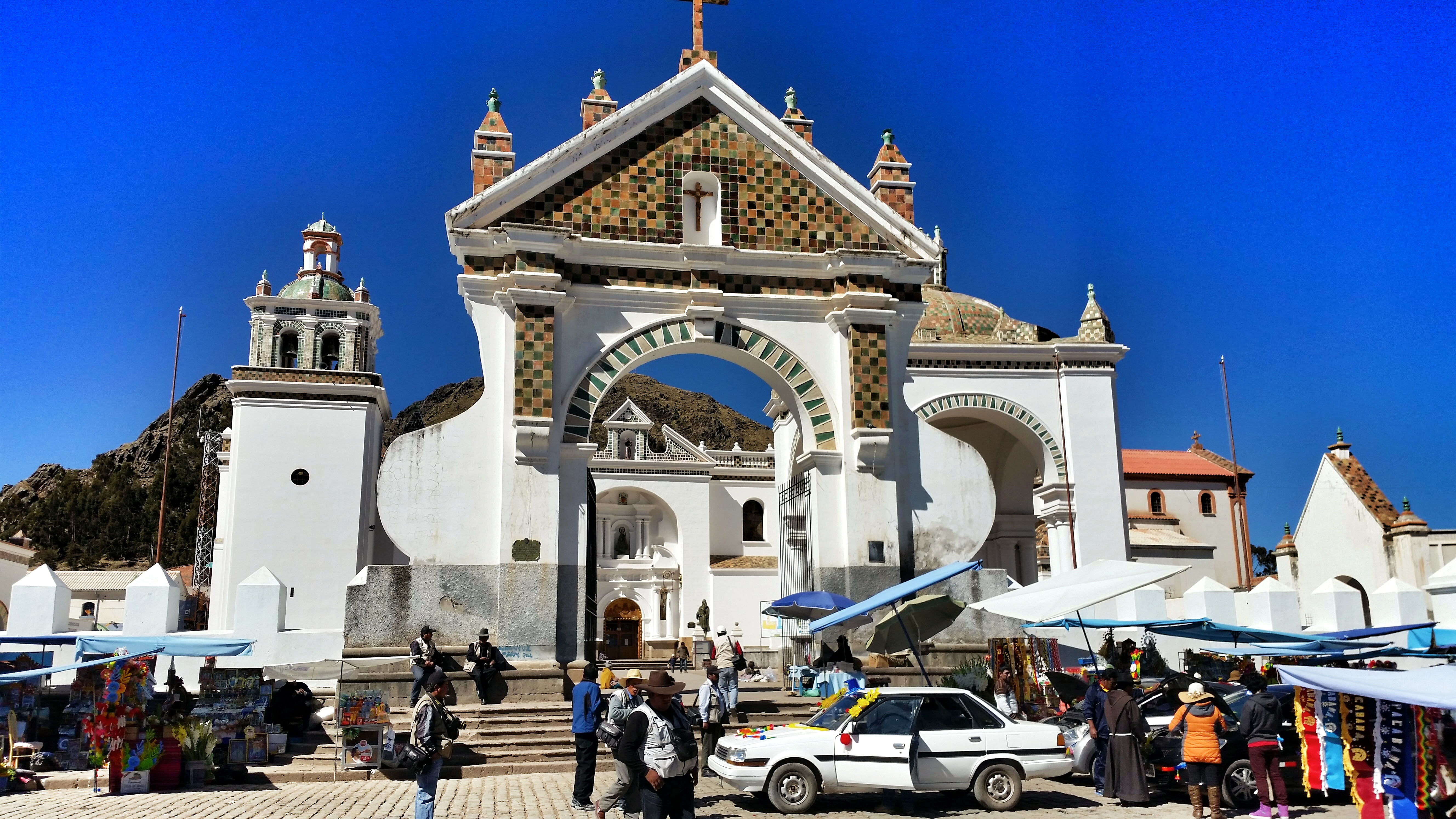 Farewells made we got on the bus to La Paz, crossing through some beautiful countryside, getting off the bus to take a small boat to cross the lake beside a barge that carried our bus across, continuing the journey before nearing the snow capped mountains and entering the expanse of El Alto and crossing through busy streets and crazy traffic to descend down into La Paz.